Marquez asked me, referring to the alumni of U.S. Army All Americans that did indeed come through the same hotel and interview in the same room that Callaway and I were sitting down talking to each other in. It was towards the end of our discussion when he asked me that question. I could tell at that moment, as he looked around the room at the 20  other athletes and 40 other cameras, he was truly humbled and appreciative to be in that spot.

So where will Quez (as he is often called) be taking his talents at the collegiate level? 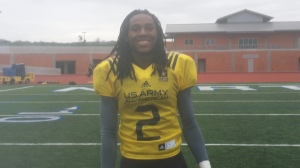 Well if I had one guess, I would have to go with Ole Miss. Even though he has yet to visit, Ole Miss is one of three SEC teams he has scheduled an official visit with later this month. All 3, the other 2 being Tennessee and Mississippi State, are the 3 schools most interested in him stepping in and playing Wide Receiver. My guess is Ole Miss because of the holes they will have on the depth chart at WR with Laquon Treadwell and Cody Core both leaving. Ole Miss is closer to home(but not too close) than Notre Dame, another school he took an official visit to. The school closest to where he grew up, Georgia, wants him to play safety, a position Quez does have experience in, but is not his ideal choice. Most of all the other schools want him to play cornerback, which is the position that he is going to play in the U.S. Army All American Bowl. Although he likes playing cornerback, I could tell by Callaway’s voice inflections that receiver is where is heart is.

“That’s what I want to play in college is receiver, But I’ll do whatever gets me on the field“

Although, all of this could be thrown out the window if a big school were to offer him a full basketball scholarship. He said so far only the smaller schools have offered him a chance to play basketball for them.

A couple of teammates have made a push at recruiting Quez to the school they will be attending, including Defensive Lineman Dexter Lawrence who told Quez that Clemson needs somebody his size and his length to go in, and Wide Receiver Austin Mack who got a coach from Ohio State connected with Quez. Callaway said they have sent a few texts back and forth.

Here are some of the questions I asked Marquez, and his full responses.

T. Arevalo:  When did you know that football was the sport you wanted to pursue?

Marquez:   ” My freshman year I played football with my middle school friends that came up, then going into my sophomore year I wasn’t going to play football for basketball reasons.  I wanted to stick to basketball, but I ended up playing football, and I just had so much fun there. All the fun I was having with the team ended up getting me a scholarship. Georgia was my first offer my sophomore year so I was thinking since I’m having fun out here and it got me a scholarship, I want to know what will happen if we went further into it and it got me here. So I’m blessed to say that.“

T. Arevalo: You guys played man and zone coverage in high school? Which one did you prefer?

Marquez: ” It was about 50-50. I like zone better. WELL, I wouldn’t say BETTER. I like a little of both because if I played zone I’d be able to see whats going on, but in MAN I’m really locked on the #1(WR), so they could be using him as a decoy to lead me out, so I’ll say zone better.“

T. Arevalo: Say you are doing very well in your junior or sophomore year of college.. Are you going to apply for the draft early?

Marquez:  “If my chances are good in the draft, I would think about it, pray about it, talk about it, and if its the best thing for me, I’ll go in the draft, cause I could always come back to get my degree, but if I think I could do better, and get a higher draft pick, Ill probably stay another year.“

T. Arevalo: After 2 practices with the East Team, who have you been most impressed with so far? WR? DB? QB? RB?

T. Arevalo: How excited were you when you first heard you were invited to the U.S Army All American Bowl?

Marquez: “When I first found out they wanted me to play in it, I thought it was like the knock off one, until I actually started reading about it, then I realized this was special. I had never heard of the Under Armour one either, I heard about the Semper one first and that’s why I thought this one was the knock off, but then I started reading about it, it explained it all, and I really realized how big it was…Saw AP, Sammy Watkins, they were all doing this. It was crazy.“

T. Arevalo: I know it’s not the most important thing to come away with a win at this game, but how bad do you want to win this game?

Marquez: “Whenever we’re competing, I’m gonna try to win, no matter what it is. Food, going up the stairs, anything….walking to class.“

T. Arevalo: You got a dance if you get in the end zone?

Marquez: “The DB’s and I came up with a dance, and the coaches“

T. Arevalo: The Coaches helped too? Does it have to do with OoWOOWOO? (If you went to an EAST practice you heard a lot of OoWOOWOO!)

T. Arevalo: You guys are a little too young for MARTIN, are you not??

Marquez: “WHO” (Lifts his shoulders and looks at me puzzled)

T. Arevalo: All you guys, didn’t MARTIN come out like 20 years ago

Marquez: (He paused and looked at me very seriously and softly spoke) ” Reruns”

Marquez Callaway is a man who I believe has the athletic skills to flourish at the next level and beyond. After watching the East team practice for 2 days, and then watching the tape at night, I decided that I saw the most potential in Callaway. Something stood out about the way he carried himself, and how effortlessly he made every play look. His motions are very smooth, and swift. For a skinny player of his height, he shows no awkwardness to his movement. He gets in and out of cuts well, and can flex at his hips while perfectly keeping his balance. Gaining some muscle-weight will go a long way for his frame and shouldn’t be a problem if he keeps working in the weight room the way he says he does.

Marquez is quite the character off the field. He had the whole team laughing as he one by one broke up interviews after the 2nd practice, by putting himself in the view of the interviewee and…..Well you just have to see it for yourself. Follow me on Twitter @Cover2Press for more coverage on Marquez Callaway and his teammates after the game today.

This site uses Akismet to reduce spam. Learn how your comment data is processed.